Palma was founded in the year 123 B.C. by the Roman Consul Quintus Caecilius Metellus, Ca Sa Padrina is located near some possible roman constructions.

The important part of the history of the Turismo de interior and all lower Palma was at three in the morning of the year 1403 of october 14th. The stream Sa Riera that was located at the end of the steet in Las Ramblas flooded. 20.000 people were sleeping. 5.000 people died making it the worst eveenviromental accident in the four islands. The whole area was destroyed but two churches. So the building of Ca Sa Padrina had to be built after 1403. 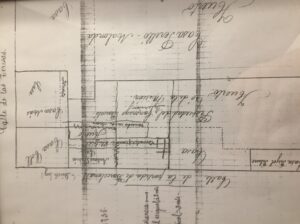 Drawing from 1736, Carrer Missió with Tereses.

Provably at some point was a part of the neighbour house, in the first floor there is an arch that provably conected

with the other house.

Arround 1960 the house had a restoration. In 1999 the facade was restored. The previous owners were from Soller and     installed in Palma.

Bought the building to the family that had owned the house forever and restored the building.